RiTribes is home to a variety of people, perspectives, ideas, and information.

Text vs. Images: Which Content-Format is Effective?

A copywriter and a graphic designer walk into a bar.

The copywriter confidently declares “text trumps visuals” but the graphic designer shouts in protest “no way, visuals rule the world!”

So who should we root for?

There’s no two ways about it —  thoughtful content and beautiful visuals can help make your story, message, or content into an engaging piece that gets the attention of your audience.

While thoughtful, text-only content has its pros in communicating with impact, there’s been a significant shift in recent years favouring a combination of text and visuals — eye-catching infographics, beautifully crafted animations, clever gifs, and stunning Powerpoint presentations.

But have you ever wondered why would you rather click on a social media post with a gif or video than a link with no visuals?

Why is it easier to comb through an article with images peppered in between texts?

In this case study, we make a case for visuals over text in powerful business communication, learning, and memory recall.

Sure, we might be a bit biased because we help people create engaging, effective infographics and animation, but we made sure to stick with the facts, latest findings, and reliable insights that we can find.

Why Your Brain Loves Looking at Pictures

Vision trumps all senses. Pictures beat text as well, in part because reading is so inefficient for us. Our brain sees words as lots of tiny pictures, and we have to identify certain features in the letters to be able to read them. That takes time.

Text vs. Images in Everyday Communications

Here are several insights and research findings on why visuals trump text in everyday communications:

The human brain can process entire images that the eye sees for as little as 13 milliseconds. – Source 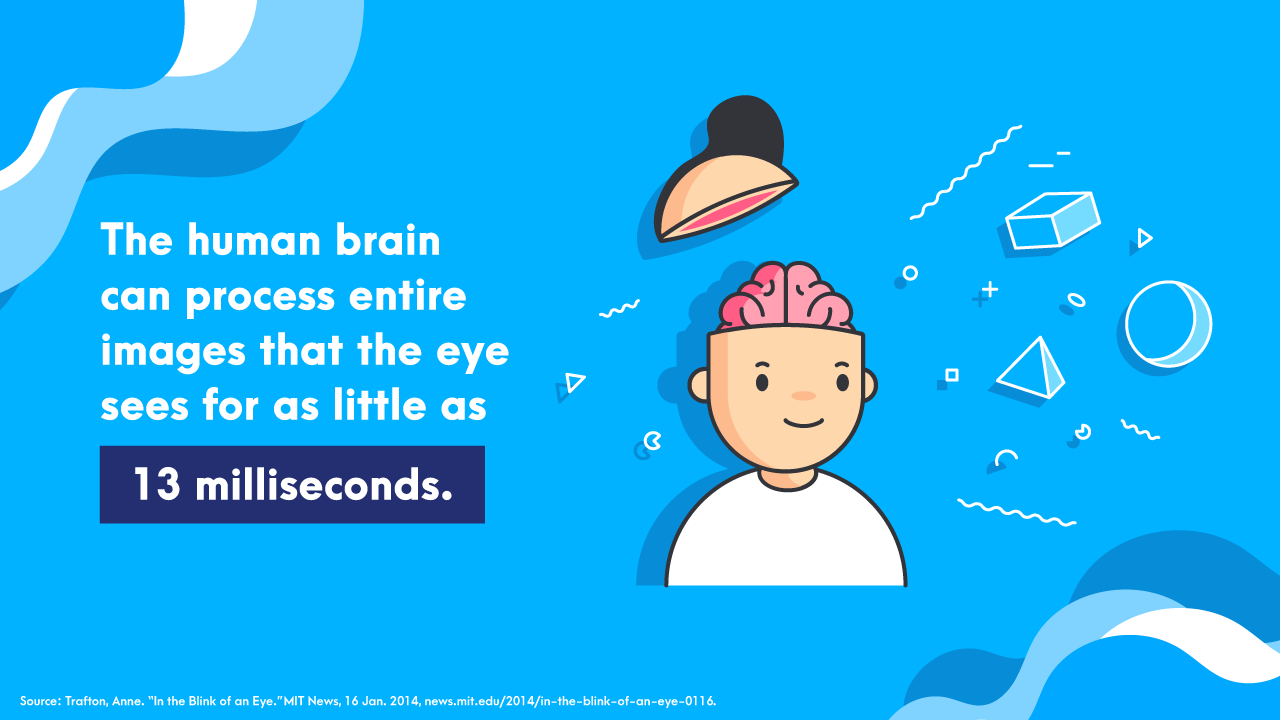 When an image is seen for only 13 milliseconds before the next image appears, a part of the brain continues to process the images longer than the amount of time it was seen. – Source 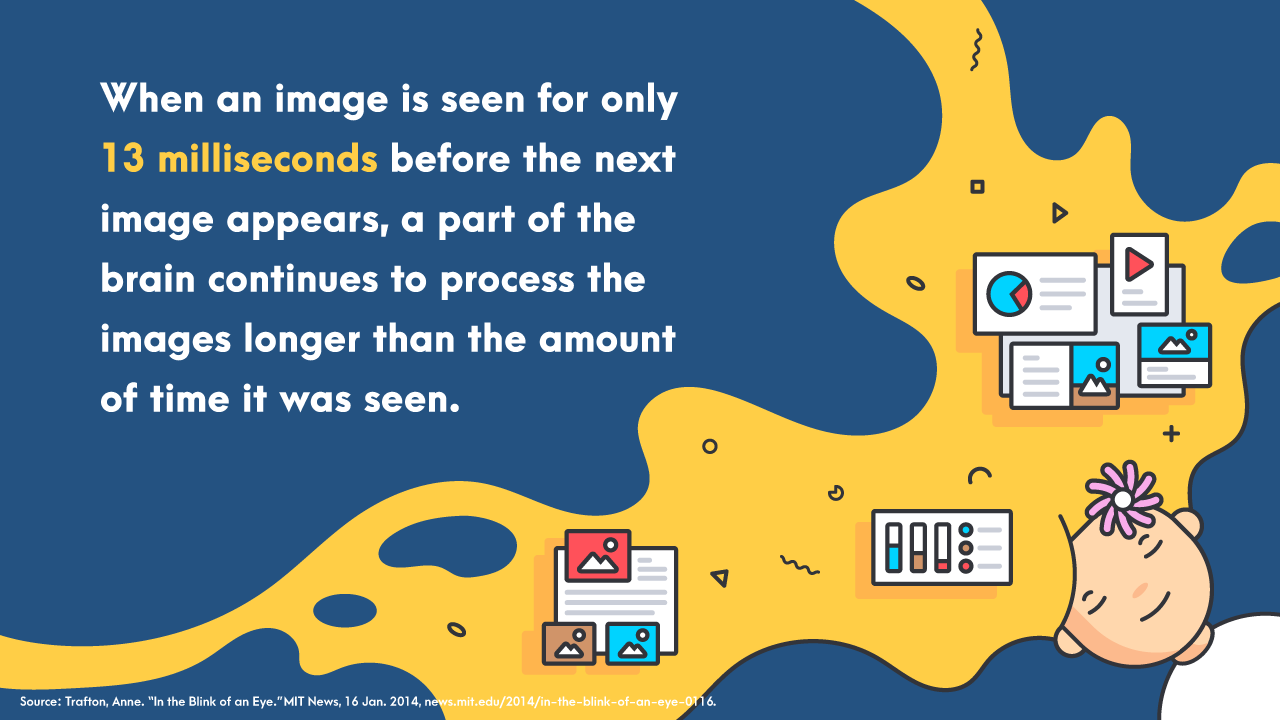 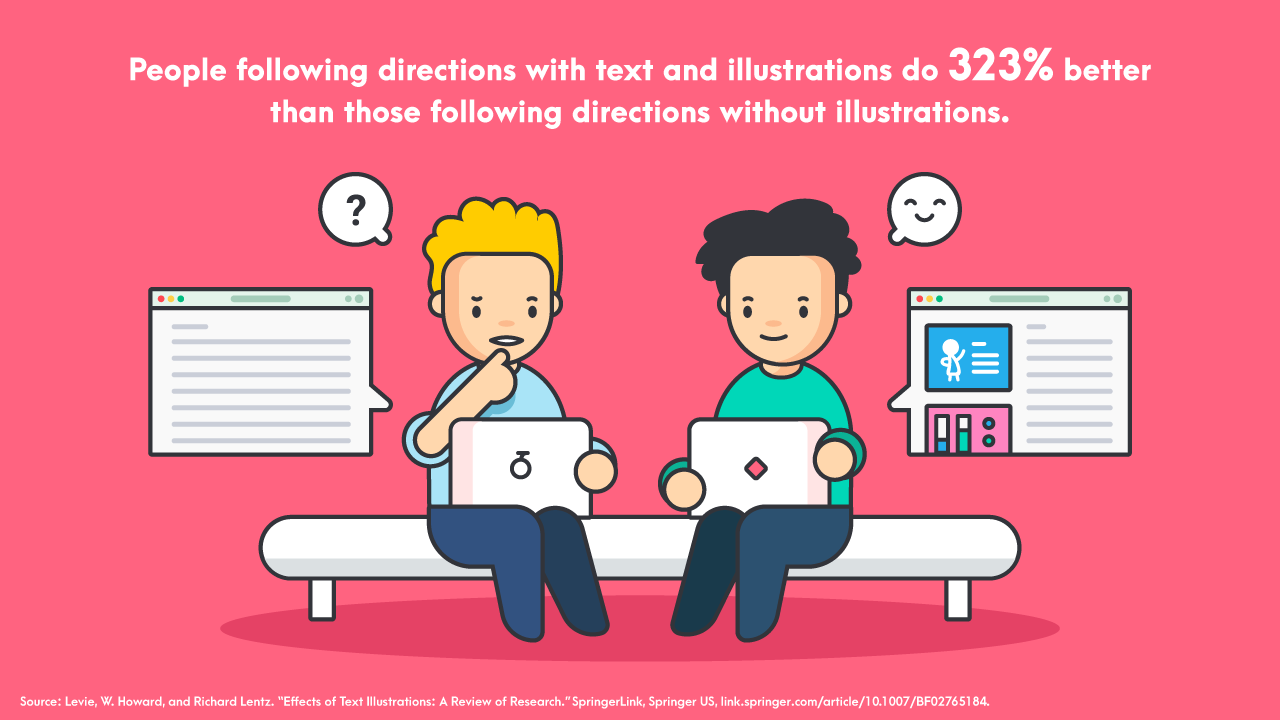 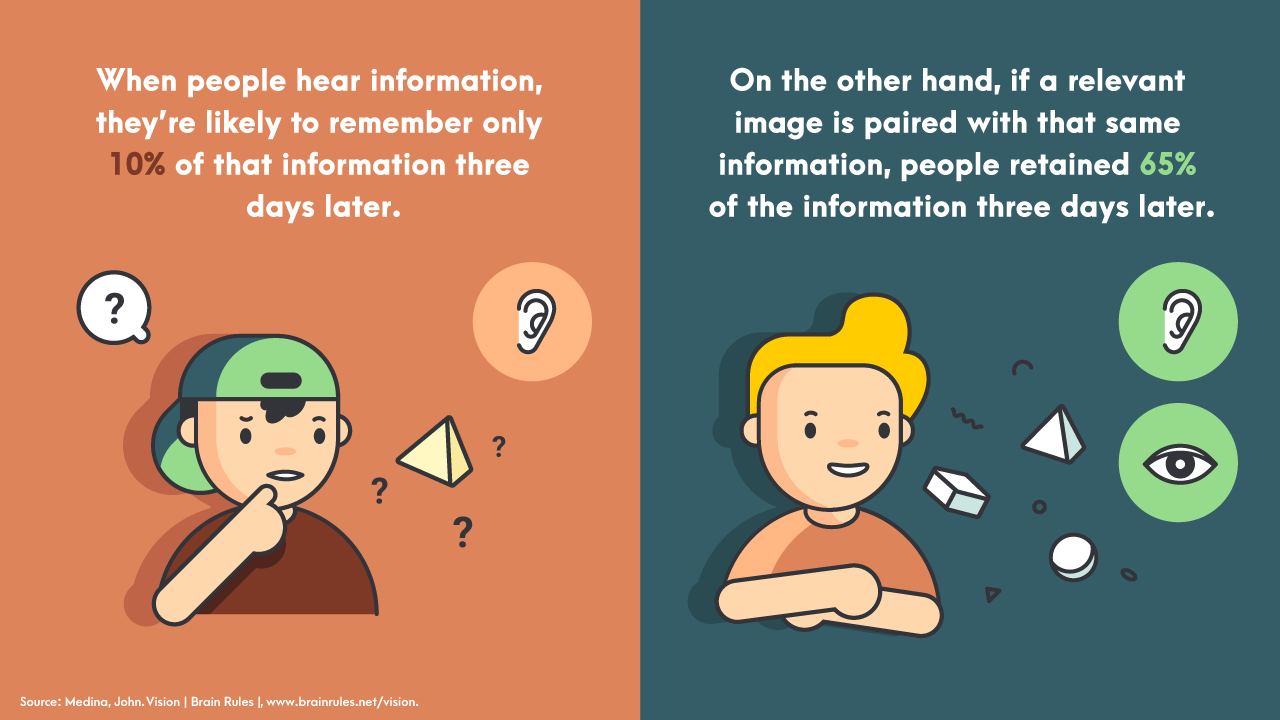 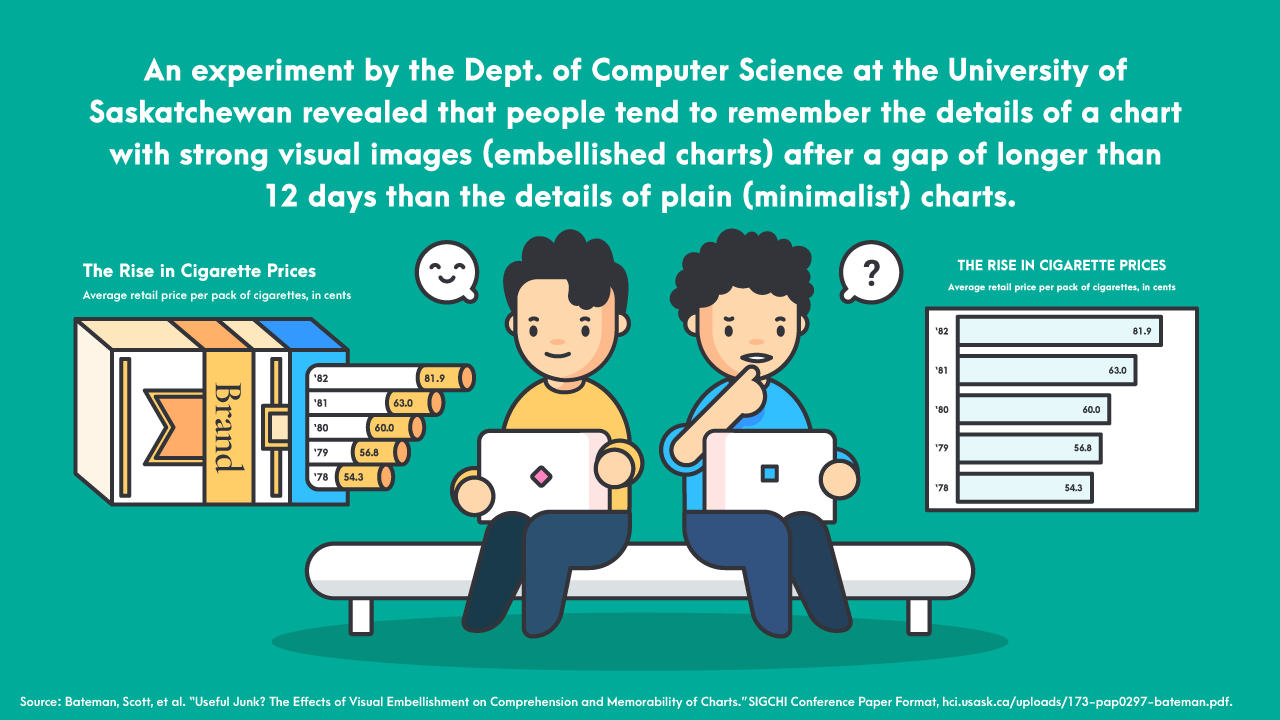 Text vs. Visuals in Education

It’s as important to be visually literate, to understand pictures and how they affect us, as it is to be word-literate. Many of us employ visual language, often without realising it. Being fluent in the language of images gives us an advantage at school, at work, and at home.”

– Visual Literacy: Why We Need It, Brian Kennedy

Using visual aids in the classroom help improve learning by up to 400 percent.  Specifically, it helps students improve in the following areas:

Researchers at Georgetown University Medical Center’s Department of Neuroscience found out that your brain learns new words by adding these words to your brain’s “visual dictionary”. – Source

Text vs. Visuals in Marketing and Business Communications

Visuals aren’t just flashy; they can help define and complicate a brand’s identity by giving marketers another language to speak. And it’s not just logo design—branded visual content tells its own story through color, rhythm, humor, and tone. If you can show your audience who you are, you don’t have to waste time telling them over and over. – Emily Gaudette, Engaging Your Audience With Visual Content: The 2019 Report

Animated infographics tend to generate the highest number of social shares than charts, graphs, and other visuals. – Source

An analysis of blogs in different industries done by Quicksprout revealed that articles with data-driven visuals such as charts and graphs receive more trackbacks – 258 percent more than blog posts with other types of images.

They also discovered that animated infographics generated the highest number of social shares compared to graphs, charts, and other visuals.

In a HubSpot survey, 54 percent of consumers wanted to see more video content from a brand or business they support. – Source 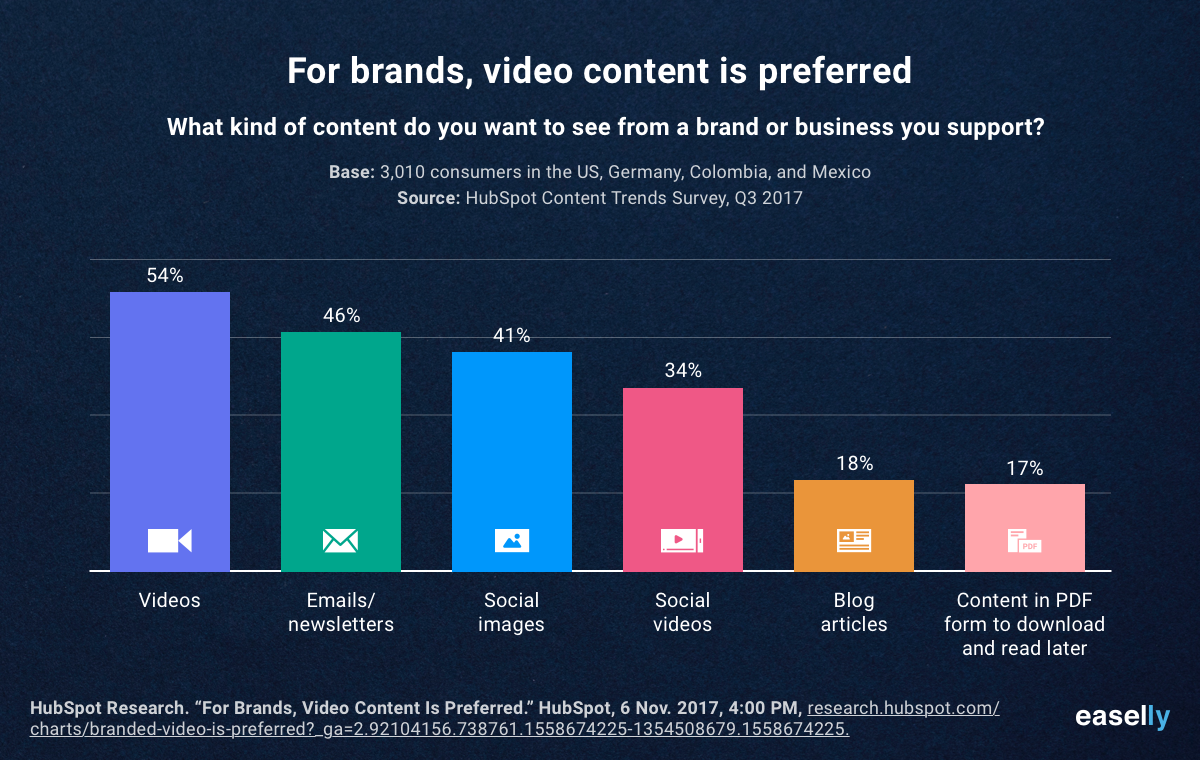 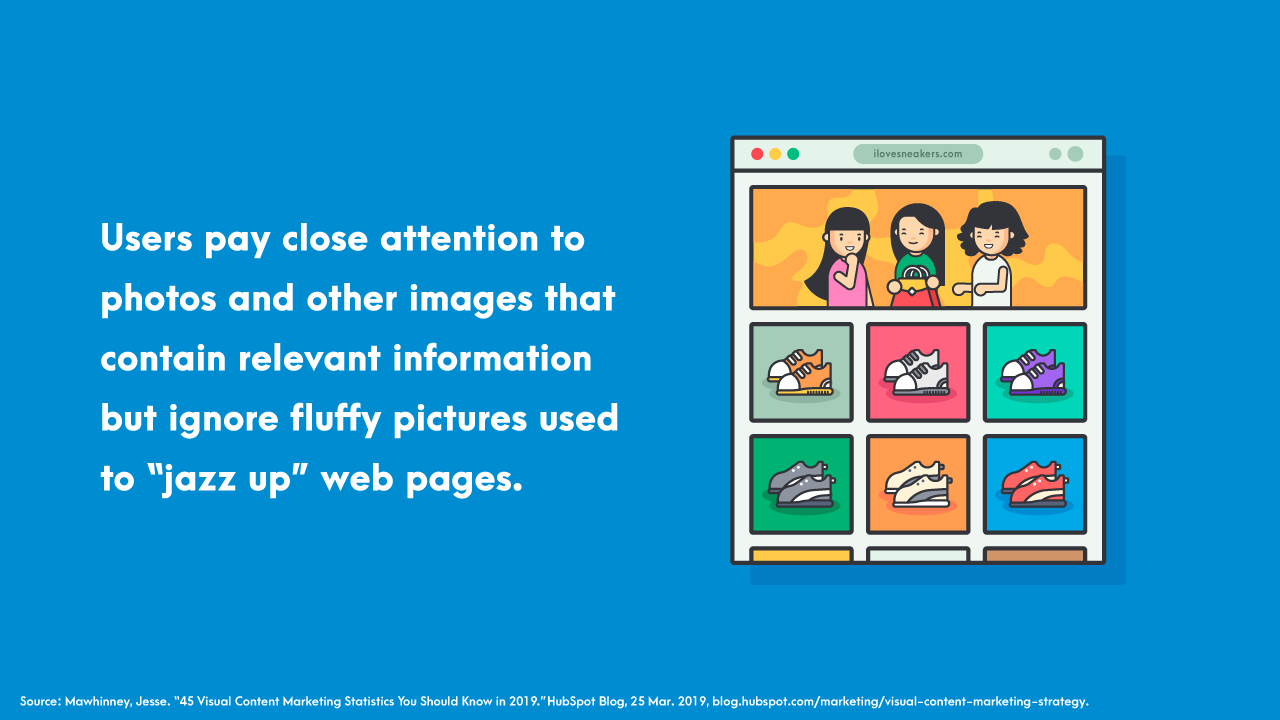 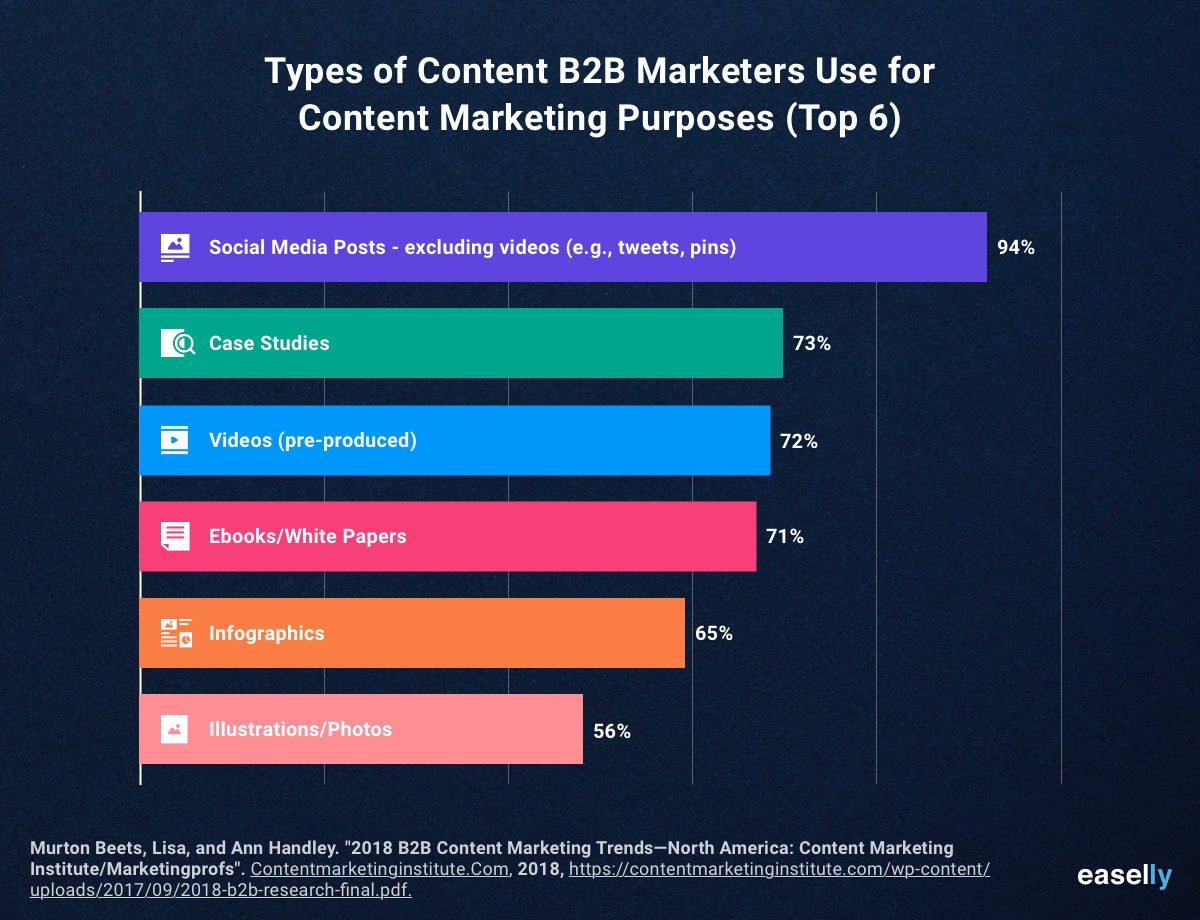 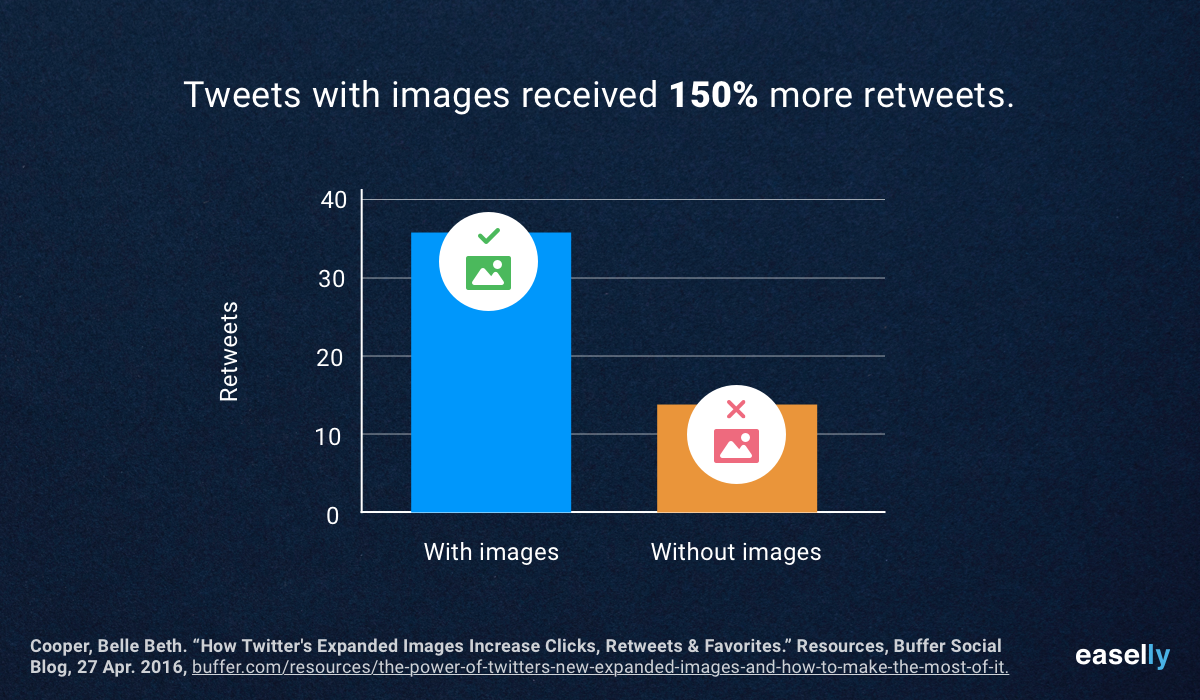 When content marketers were asked which visual content they will likely take advantage in 2019, their top 5 responses were: short-form video, original photographs, infographic, animated gifs, and Instagram stories. – Source 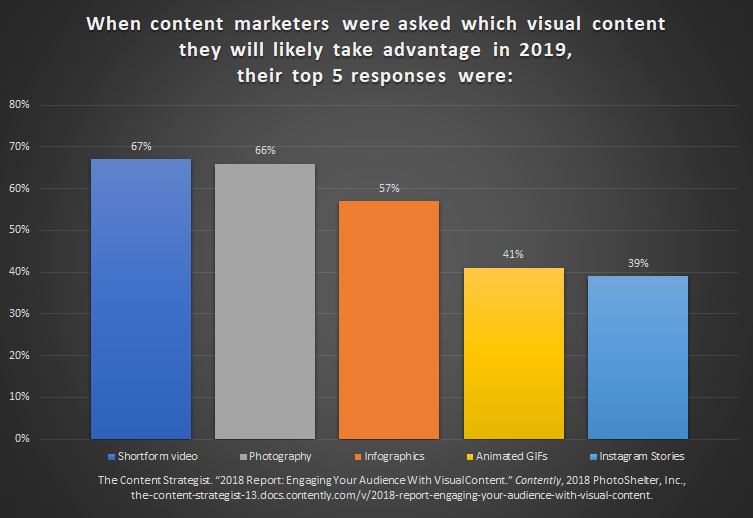 Link to the source